One Step At a Time

Jay Cochrane’s skywalk 25 years ago was an engineering marvel and an early success in using digital technology from the heart of China. This is the story of how a highwire and a mac laptop brought Qutang Gorge to America.

EVERY PICTURE HAS A STORY collection
By Mark D Phillips

On October 27, 1995, the day before The Great China Skywalk, Jay Cochrane stood on a sliver of wire, a quarter of a mile high over the rushing water of the Yangtze River. I had never seen him perform, and didn’t know what to expect. As we watched, Jay moved his feet back and forth, getting the feel of its many strands. As he moved farther out the wire, the assembled crowd seemed to stop breathing. Everyone was absolutely still and quiet. Jay stopped and ever so slowly, walked backwards, toe to heel, back to earth. It was spellbinding.

These pictures would never be recreated. It truly was a once in a lifetime experience.

And it was my job to bring these images to the world outside of China. As a photographer with the Associated Press and Agence France-Presse, I had photographed many events around the world. But this was different. This was from Fengjie, China, a twelve hour time difference from New York City and a serious step back in both infrastructure and press freedom.

Jay needed images and information about his skywalk to reach the world. In 1995, there were no smartphones. We had just started using Macintosh laptops and Nikon film scanners to transmit images. But there was no high speed Internet. These were the days of 28,800 modems over copper lines that at times would drop calls in the middle of sending the image. If that happened, you started over again.

I was using CompuServe, then a revolutionary network with local numbers everywhere. I was one of the first photographers to use CompuServe to transmit images, the service had allowed me to send images back to New York City in minutes while documenting Nelson Mandela’s historic presidential campaign in South Africa. But this was China. The closest local number for CompuServe was in Hong Kong. It may as well have been the moon. 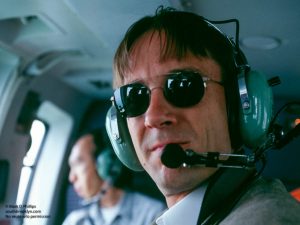 On the morning of October 28, 1995, I accompanied Jay in a Chinese military helicopter that would drop me at the finish of the skywalk atop the south side of Qutang Gorge, then continue on to the start location on the north peak. As we passed over Fengjie and flew into Qutang Gorge, it was second nature to begin shooting photographs out the window. An angry military officer placed his hand over the front of my lens. Jay quickly grabbed the officer in an embrace and told me to take their picture. Later, I was told it was illegal for me to take photographs from or in the helicopter.

I stood at the edge of a cliff with Jay’s protege, Clinton Randall, looking at a cable vanishing from sight before reaching the other side. Just after 11am, Jay’s voice crackled over Clinton’s handheld radio, “It’s time to make the donuts!” And with that his skywalk was underway.

In 53 minutes, Jay skywalked 2,098 feet, with the Yangtze River over 1,300 feet below. Seeing Jay balanced on a wire, suspended between the magnificent cliffs of Qutang Gorge, was one of the most thrilling, spectacular, and terrifying events I have ever witnessed.

I was intensely aware of the deadline. I had a hand processing line set up at the hotel to develop the film. Even this was a challenge. There was no hot water at the hotel, so the kitchen was on alert to bring me teapots. I had no darkroom so everything was done in changing bags – unloading film canisters, loading it on a reel, placing it in a tank – with your hands inside a sealed bag. Piece of cake. Problem was, I could only process four rolls of film. All the rest had to wait till I got back to America.

I had carried a miniature hair dryer all the way from America for one purpose, to dry my film so I could scan it for transmission as quickly as possible. To do that, I would use a Macintosh Powerbook Duo and a Nikon LS-1000 scanner.. I had sweated all the way through customs, sure an official would take them from me. In 1995, I was one of the few carrying electronics. On top of the electronics, my luggage included a 600mm lens in a metal case, 6 lenses in a Domke bag from 300mm to 20mm, 60 rolls of film, film developing kit, and the smallest bag which held my clothes. Yes I did laundry a lot.

With all that I brought, when it was all developed and dried, I had two negatives that I wanted to offer to the western media.

For the next two hours, I was trapped in telecommunications hell. The lines were overloaded, crackling with static, and I had a slow modem, even though it was state of the art. Every time I got connected to Hong Kong, the transmission would fail at some point, one time making it to the final 30 seconds. I was getting desperate. I called my friend Robyn Beck in Beijing, who as AFP’s staff photographer, had one of the only Macintosh computers in the country. We were able to connect and complete ONE transmission. Robyn had a dedicated line to the AFP office in Hong Kong, and voila! Jay Cochrane’s skywalk made it into the queue for delivery worldwide.

Jay Cochrane on one foot, saluting the crowd, towering over Qutang Gorge, with the Yangtze River far below. The picture that told the story. 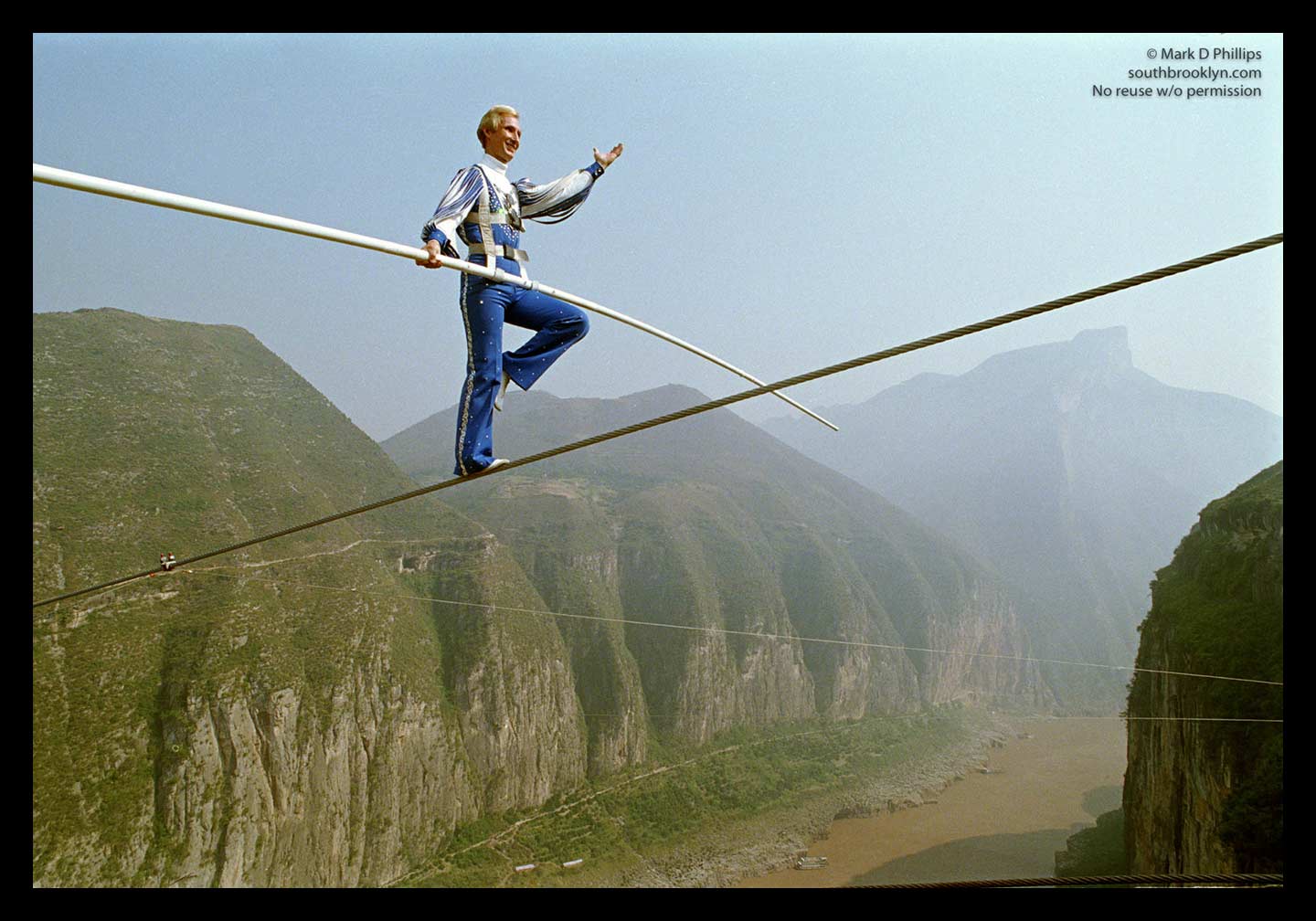 Jay Cochrane salutes his fans as he stands above the Yangtze River during The Great China Skywalk in a beautiful hand printed, hand signed and framed 13″ x 19″ collectible from Mark D Phillips’ new series, Every Picture Tells A Story.

Each image comes with a framed 8″ x 10″ story of the photograph and a paper version attached to the back of the frame.